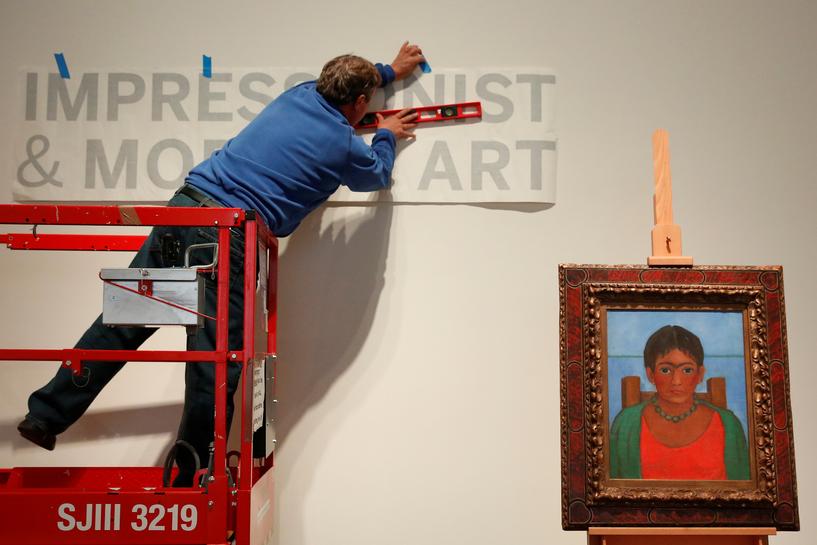 A Frida Kahlo painting that has never been publicly exhibited and whose whereabouts had been a mystery will be auctioned next week at Sotheby’s in New York, the auction house said on Monday.

“Niña con Collar,” (Girl with Necklace), a 1929 oil on canvas, will go on the auction block on Nov. 22 at Sotheby’s Latin American sale with an estimated value of $1.5 million to $2 million.

“This hung in a California home for 60 years,” said Axel Stein, head of Latin American art at Sotheby’s. “The painting looks very fresh. It was in a dark part of the house so the colors are vibrant.”

Kahlo died at age 47 in 1954. The following year, her widower, the muralist Diego Rivera, gave the painting to a woman who had helped Kahlo in the studio, Stein said.

The recipient took the work home to California. Now in her mid-90s, she offered it to Sotheby’s this summer, he said.

The auction house declined to comment on why the owner sought to sell the piece.

“Niña con Collar” is among the first 20 of Kahlo’s 143 paintings, Stein said. It prefigures hallmarks of the artist’s self-portraits, including winged eyebrows and the full frontal gaze.

The subject, a girl of about 13 or 14, stares directly at the viewer. “There is a sense of warmth and closeness,” Stein said.

As in some Kahlo self-portraits, there is little depth. The background is a mix of indigo and sky-blue; the face of the girl is copper-brown. She wears a jade necklace that appears in other paintings by the artist.

In international art markets, works by Kahlo have fetched more than any other Latin American artist, said Stein.

22 Nov This entry was published on November 22, 2016 at 8:41 am. It’s filed under Article and tagged Diego Rivera, Frida Kahlo, Mexico City, Sotheby's. Bookmark the permalink. Follow any comments here with the RSS feed for this post.